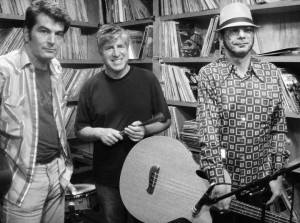 New Texture is a Los Angeles-based arts collective-turned-publisher; our first three books will debut at in-person events across Los Angeles in July, 2010.

Josh Alan Friedman is the acclaimed author of Tell the Truth Until They Bleed and Tales of Times Square. But back in 1962, he was a first grader, at the start of a four-year odyssey as the only white boy in the last segregated school in New York. His autobiographical novel from Wyatt Doyle Books, Black Cracker, is a memoir of those years.

Challenging long-held preconceptions about race, class and character, Black Cracker boldly moves beyond mere “culture clash” into “multicultural steel-cage match.” A deeply personal, achingly funny book from a writer who has never shied from controversy, Black Cracker may be Josh Alan Friedman’s most provocative work yet.

With typically unflinching insight into the many shades of human nature, Josh Alan Friedman chronicles a childhood at the flashpoint of the Civil Rights era, spent with one foot in Long Island’s well-to-do suburbs and one in its now-forgotten poor Black shantytowns. As young Josh encounters an unforgettable cast of characters and befuddling situations ranging from bizarre to tragic to roaringly funny—and often all three—Friedman illuminates the myriad ways outside influences, both humane and insidious, color our judgment and attitudes, almost from the cradle. Black Cracker is the funniest book that will ever break your heart.

A Minute to Pray, A Second to Die: A Collection of Writing by Chris D.
(New Texture books, $24.95 paperback)

Admirers of Chris D.’s work as a musician (The Flesh Eaters, Divine Horsemen) may be unaware of his significant body of work as a poet, novelist and screenwriter. Encompassing 35 years of writing across a variety of genres and styles, A Minute to Pray, A Second to Die is a 500+ page career anthology from New Texture that corrects that oversight.

“Eclectic” can’t begin to define a compendium collecting all of his lyrics and poetry, surreal dream stories, and excerpts from several novels. Yet perhaps most revealing are the candidly autobiographical passages peppered throughout, providing personal and artistic context while nakedly detailing his struggles with personal obsessions. Sex, drugs and rock ’n’ roll, sure; but also fevered poetry, religious damage, and rabid cinephilia.

A Minute to Pray, A Second to Die is an exhaustive collection of writing by one of the godfathers of Los Angeles punk rock. Deeply cathartic and intensely cinematic, writer Chris D.’s varied selections stake their claim squarely in the shadowlands between arthouse and grindhouse; 19th Century romanticism roughed up by James M. Cain, “cut up” by William S. Burroughs, and screened on a wall at a bordertown drive-in.

Public transportation is a great equalizer. No matter who you are or what circumstances put you there, you’re on the bus. And in Los Angeles—a city obsessed with status, image and the car you drive—when you’re on the bus, you’re really on the bus.

But just because it’s no place to meet movie stars doesn’t mean there’s any shortage of memorable characters among the lost, the delusional, the disenfranchised and the drunk. These aren’t merely people who ride the buses, they’re people you might never get to meet anywhere else.