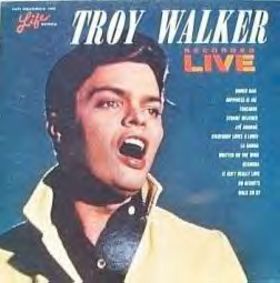 Messaround thrill wrangler Jonny Whiteside joyously welcomes back Troy Walker, the hyper-flamboyant, ultra-talented song stylist whose wicked humor, show-stopping presentation and gale-force lungpower first immolated Sunset Strip lounge lizards almost fifty years ago. Walker’s passion, involvement and flawless execution are as indisputably arresting as ever, still soaring to the out-of-this-world level that won him such fans as Elvis Presley, Louella Parsons, Ethel Merman, Mae West and Ronald Reagan. A historic, albeit inadvertent, pre-Stonewall symbol of Way Out queer equality, Walker’s take no prisoners candor drove him to include a smoldering version of “Happiness is a Thing Called Joe” on his prized Live at the Crescendo LP and later–against all odds– allowed him to become a beloved 1970’s fixture at redneck C&W shrine the Palomino. Walker’s phrasing, repertoire and gift as an arranger always set him apart and led to alliances with distinguished players like Country-rock godfather Leon Russell (who bestowed Joe Cocker with a major hit via Troy’s kicking arrangement of “Cry Me a River”) and an eight year collaboration with Hollywood studio guitar titan Jerry Cole. Making only his second appearance in more than a decade, expect nothing less than a high-voltage dose of cut-above country, soul and rock & roll kicks from this most boss, one of a kind entertainer. 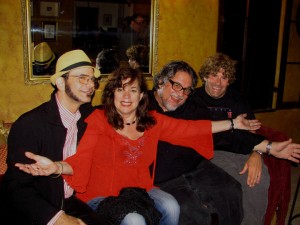 The Dick and Jane Family Orchestra 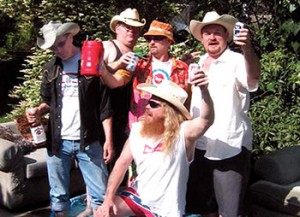 Groovy Rednecks, hard-charging honky-tonk hell-raisers whose near two decades of mayhem and wig flipping have earned them both the affection of a hardcore cult following and a tattered mantle of disprespect from squares throughout Southern California. While titles like “How Come I Only Love You When I’m Drunk?”, “Drinkin’ Band” and “Buzzed” speak to the group’s drastic capabilities, their songs are more painstakingly crafted country gems then painfully corny genre conjuring. That’s a hell of a balancing act, but even with all that beer in ’em, these mavericks always pull it off with eerie grace.

The proceedings will ignite with the Messaround Tabernacle Choir, featuring funkenized, rocky-tonk guitar hero Harry Orlove, soulful, sinuous bassist Paul Marshall (formerly with the Strawberry Alarm Clock and the only man in the business who has worked with Russ Meyer and Rose Maddox) and deadly accurate drummer David Raven, who will play their own opening set and accompany Walker (not to mention the inevitable drop-in guest stars).