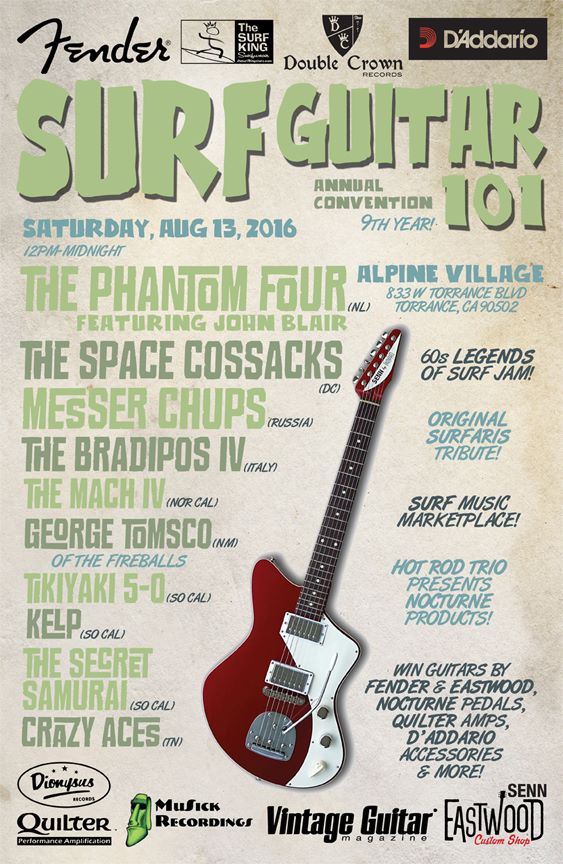 On Saturday, August 12, the 9th Annual Surf Guitar 101 Convention takes place in Alpine Village! This will be the first year the festival will take place in Los Angeles County. 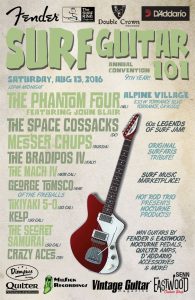 As one of the proud sponsors of the event, Dionysus Records will have a table at the 9th Annual Surf Guitar 101 Convention with a slew of Dionysus and related LPs and CDS, as well as new items from Sleazy Records, Green Cookie, and many other titles on vinyl and CD.

For the 9th year in a row, the global Surf guitar community will focus its attention on its Southern California birthplace as the Surf Guitar 101 Convention takes over Alpine Village on Saturday, August 13, 2016. What began as a fairly intimate gathering of die-hard enthusiasts and members of the internet’s number one resource for all things Surf guitar, www.surfguitar101.com, has blossomed into the most important event of its kind in the USA.

The 12 hour affair, which runs from Noon to Midnight, will feature one of the greatest lineups of modern Surf instrumental bands from around the globe. This year’s performers include Crazy Aces from Nashville, TN; The Secret Samurai from San Diego, CA; Kelp from Santa Barbara, CA; Tikiyaki 5-0 from Los Angeles, CA; George Tomsco of the legendary group The Fireballs from New Mexico; a historic reunion of the Northern California super group The Mach IV and the reunion and 20th anniversary celebration of Washington D.C.’s highly influential Space Cossacks. Representing the international contingent will be the return of Italy’s Bradipos IV, the highly anticipated appearance of Russia’s masters of horror Surf, The Messer Chups and the American debut of Dutch trailblazers The Phantom Four, featuring not only Phantom Frank from the legendary Treble Spankers, but very special guest guitarist John Blair, Surf music historian and revival pioneer of Jon & The Nightriders.

In addition to the 10 main performances, there will be an extended live set of music featuring some extremely special guests from the original 60s era bands, an all-star tribute to The Original Surfaris, an exclusive performance by local favorites The Hot Rod Trio demonstrating products by Nocturne, and a generous all-day raffle of sponsorship products that includes prizes ranging from CDs, DVDs, T-shirts, guitar pedals by Nocturne, guitar and bass accessories from D’Addario, an amplifier by Quilter, a guitar and bass from Fender and a very special exclusive Eastwood Senn model guitar!

Alpine Village, the expansive new all-ages venue for the convention, features topnotch international cuisine and beverages, a deli and marketplace, ample parking and spacious areas where vendors from some of the leading Surf instrumental record companies and collectible dealers will gather to sell their wares.