This exhibition is documented in the beautiful companion book, La Luz de Jesus 25: The Little Gallery That Could, featuring images of all the art in the show, a personal anecdote about Billy Shire and the gallery written by each artist, essays by gallery directors and a foreword by Shire. The book is much more than a simple record of this remarkable exhibition. Together, the images and essays present a history of La Luz de Jesus through the eyes of the artists whose careers are intertwined with Shire and his gallery.

In “Mannerism,” Mark Gleason continues to use Mannerist techniques with oil on canvas to explore existential themes via absurdist situations. Animals are often included to define aspects of the relationship of a central character’s orientation or connection to the world via communion or costume in psychologically fraught, private environments. Gleason’s subjects are shown in moments of preparation and conflict — his figures have roles to assume, and in doing so, a form of inner self is revealed.  His metaphoric images may seem cryptic but represent the underdog and the disenfranchised deriving fearsome capability from the mask of the powerful; figures communing with animals, or donning the guise of animals, holding knives out like some kind of animal self-protection stance or the Sisyphean struggle of attempting to lift books when you’re standing on them.

“Hopefully, my wit comes through in each painting. I would feel successful if I could convey the same kind of absurd humor found in Samuel Beckett’s writing. The imagery is a construct that has multiple meanings and layers and I leave blanks for the viewers to fill in. I’ve come to see that others bring their own stories and feelings to the work. I’ve intentionally fostered that kind of response with recent work, and I’m honored and challenged in creating something that may spark others to open their own responses to the work. I resonate to a statement by Degas to the effect that art is not what you see, but what you make others see.” states Gleason, whose work is also inspired by novelist Cormac McCarthy and silent film star Buster Keaton.

In addition to painting, Mark teaches high school art in Palo Alto, California and writes a daily music blog, “what do we have for entertainment”. This is Gleason’s second featured exhibition at La Luz de Jesus Gallery. www.markgleason.net

Fawn Fruits aka Daniel Hyun Lim relishes the spontaneity of the art and moves things as he goes with colored pencils and acrylics. His works are somewhat timeless with a striking juxtaposition of muted versus vibrant hues. The colors are an anchor to reality and are a huge factor to the symbolic message that he is telling. “Somewhere over the colors of the rainbow there lies a significantly beautiful truth, a truth that can only be realized with an intimate encounter. “Sweet IMperfections” is an artistic interpretation of a promise between the creation and his/her creator” states the artist. Rather than forcefully preaching to the viewer with religious imagery and symbolism, Lim brings new life to the genre by producing work that is based on his personal views on religion. “Although we see ourselves as imperfect souls, in the eyes of a loved one, we are perfect” states Lim who feels that there are enough serious paintings in the world that shout and make big statements. He wants his work to be more subtle and speak peacefully to the viewer and to bring a moment of tranquility. His dream is to show the world some love, one Fawn Fruits at a time. Lim is an illustration instructor at Otis college of Art and Design, Santa Monica College and Red Engine Studios. www.fawnfruits.com

Danni Shinya Luo’s female forms breathe with a sensuality and intuition that will shatter your preconceptions about her chosen medium, the watercolor painting. Shinya’s fluid and organic figures are full of feminine mystery and romance. Her colorful animals are magnificently fierce, emanating a primal magnetism that is practically pheremonic. In “Chaotic Harmony,” using whimsical and subtly erotic figures, the interactions of human beings with their avatars from the animal kingdom convey modern psychological truths while relating age-old mythologies. The concept of this new collection is birthed from the artist’s own internal world; her past experiences are transformed into physical creatures, textures and color palettes. The subtextural inclusion of archetypal symbolism is never forced nor heavy-handed, but further enriches the central, “surface” view with allegorical depth –a reward for those willing to investigate just a bit further…

Originally from Shanghai, China, Danni Shinya Luo moved to California in 1995. She fell in love with art in grade school and after a few years of private study (and an apprenticeship with Chinese watercolor master, Ding Ha) was accepted into Art Center College of Design in Pasadena, where she majored in illustration and graduated with honor in 2006. Shinya participated in key group shows, select solo exhibitions, and saw her work published in periodicals like Bust and Initiativa, books like “Eye Candy” and “Sugar & Spice,” as well as design projects like Nickelodeon’s Neopets and a line of toy dolls for Hasbro. In the year that has passed since her last featured exhibition, “Spiritual Deficiencies,” Shinya has published a now sold-out collected volume of her gallery exhibited work, “Breaking the Ice.” She also helped develop the re-branding of Marvel Comics’ signature female mutant “X-23” (providing the cover art for the first three issues). Later this year, her second book, “Soft Candy: The Art of Danni Shinya Luo,” will be released through seminal art publisher Last Gasp Books, featuring a collection of 200 full color pages of brand-new drawings and paintings. www.fawnfruits.com 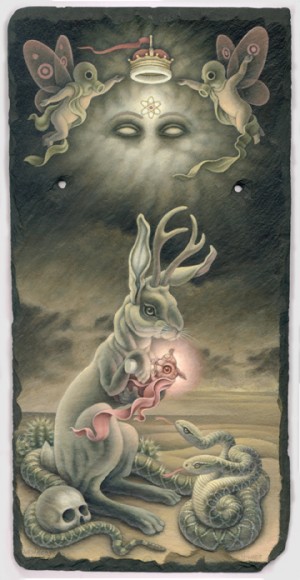 Suffused with pessimistic shadows and redemptive illumination, Canadian pop-surrealist painter Heather Watts’ intricate paintings harness the pageantry of anthropomorphic heroes and martyrs to tell the story of individuals grappling with forces larger than themselves. “Some of the pieces for this show are quite dark thematically, but I’m not interested on focusing on the darkness for its own sake in my work, I’m interested in using it to show light, to paint darkness as something that reveals light, to see the darkness as a canvas for light, an opportunity for light to shine”  states the artist.

Watts, who is well-known for her past tiki-inspired paintings has exhibited works in galleries across the US and overseas, including La Luz de Jesus, Strychnin, The Shooting Gallery, M Modern, and Roq la Rue among others.  She is a self-taught painter with a Bachelors Degree in Asian Area Studies from the University of British Columbia. www.heatherwatts.com

Incelebration of this show and La Luz de Jesus’ out-of-town guests, Heather Watts (Vancouver, BC) and Mark Gleason (Palo Alto, CA)  there is an official after-party in the bar at TAIX, a beautiful French restaurant established in 1927, just a short drive from the gallery on Sunset Blvd in Echo Park. The Dick and Jane Family Orchestra features vocalist Jane Cantillon, her husband Richard Ross on guitar, percussionist Michael Pfeffer and La Luz de Jesus publicist Lee Joseph on bass. The combo plays a hybrid of urban garage folk. The show starts at 11:00 pm and the band starts at 11:30 pm. No cover charge!

Heather Watts and Danni Shinya Luo have shows upcoming at La Luz de Jesus, opening on April 1 – here are links to an interview with Heather, featuring some pieces that will be in the show, and a time-lapse Vimo video of Danni Shinya Luo creating a beautiful piece with a col-erase red pencil and ball point.

Link: Danni Shinya Luo in her second Vimo installment, “Year of the Rabbit” breathtaking! Music from the equally lovely Karen O and The Kids.