Collection remains on display and for sale June 26 through August 15, 2010

(Santa Ana, Calif.) – Grand Central Arts Forum, the support group for Grand Central Art Center (GCAC) is revitalizing the hit exhibition, 100 Artists See Satan, a survey of contemporary artists and their interpretation of the supreme demon. Unlike the original exhibition, this iteration of the collection will be presented as a fundraiser, with works available for sale to the public. All proceeds will benefit future GCAC programs and exhibitions. An exclusive preview will be held Saturday, June 26 from 7-10pm with a public opening reception on July 3 from 7-10pm. The exhibition will remain on display through August 15, 2010.

100 Artists See Satan was originally organized by GCAC in response to another exhibition, 100 Artists See God, curated by John Baldessari and Meg Cranston for Independent Curators Inc. New York. The two shows exhibited simultaneously in 2004, Satan at GCAC and God at Laguna Art Museum, and gained notable attention from the public and media.

To further raise funds, Grammy Award winning graphic and packaging designer, Hugh Brown has been commissioned to create a 100 Artists See Satan credit card, limited edition of 666. This collector’s item is available only at the GCAC bookstore for $50. Cardholder’s benefits include a discount on select merchandise at the GCAC store and an invitation to the VIP preview event on June 26.

Grand Central Art Center is the anchor for Santa Ana’s downtown Artists Village. Established in 1999, it has garnered an international reputation for provocative and innovative exhibitions and publications. The art center’s acclaimed artist-in-residence program has hosted forty-four artists from around the world, and the Forum sponsored fine art print programs has published twenty-two limited edition prints.

Grand Central Arts Forum is dedicated to the advancement of contemporary art and visual culture in cooperation with California State University Fullerton’s Grand Central Art Center. The Forum sponsors exhibitions and programs that raise public awareness of the visual arts in Southern California while providing artists with opportunities for exposure of their work. The Forum collaborates with local, regional, national and international artists and arts institutions.

Free concerts at California Plaza in Downtown Los Angeles on the 2nd Friday of every month. The program includes performances by local emerging indie bands. The concert series is a collaborative effort by the Downtown Music Project, lafreebee, Isgoodmusic, SideCho Records, Dramaturgy Promotions, Casa Downtown and the artists themselves.

from Hamburg Press Review:
Azalia Snail appeared on the stage. Right away at the beginning one felt that the audience would be given a special performance, even if only for four songs. While building a pedestal with a silver cover, over which she put her little white synthesizer, this feeling was only further strengthened.  Azalia Snail, who was formerly known as the “Queen of lo-fi,” did not actually need to do very much to place the audience under her spell.  Already the first song, Golden Slumbers, fascinated with the typical mix of Azalia Snail church organ and psychedelic indie sounds.

Neumusic review:
Azalia Snail has been making her uniquely sweet, viscous, noise-inflected, tempo-bending psychedelia for almost two decades, recording a dozen or so albums between 1990 and 2006 on labels including Funky Mushroom and Dark Beloved Cloud.  She’s back with a disc on Silver Lake’s experimental True Classical Records, a dense haze of swooning vocals and seething synths cut by abrasive swaths of indie guitar mayhem. The music has its share of discordant moments and harsh textures, but somehow these are enveloped in a softening sheen; as Snail sings in the opening track, it is “Heavy mental/ Honeysuckle gentle.”

Azalia Snail is a recipient of a LA Weekly Music Award for “Best New Genre.”  She has toured the USA, Europe, Japan, and New Zealand.  She has jammed with Beck, The Black Heart Procession, The Grifters, Trumans Water, Low, and many other unique musical artists.

Last Thursday a few people migrated to El Chavo on the Los Feliz / Silver Lake border after Lina Lecaro’s “Los Angeles’s Best Dive Bars” book signing at La Luz de Jesus Gallery. On the way back to my car, parked on Sunset near the gallery, I was waiting for the light at Hillhurst to turn green when I looked in the window of a vacuum cleaner store next to the Good Luck Bar – a sparkly gold vacuum cleaner in the window caught my eye and upon further examination I noticed the machine’s  “Privilege” logo (interesting name for a vacuum cleaner) looked really familiar. Have a look for yourself. The Royal company should give Dionysus Records a vacuum! 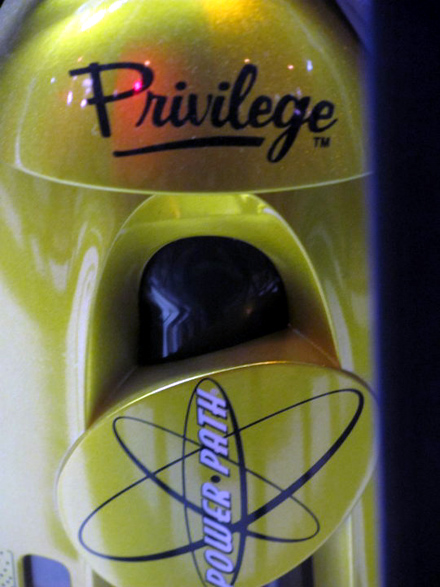 Dionysus Records logo by Dave Stuckey was originally designed for the Big Sandy “Don’t Desert Me” single released way back when. This logo design has, and continues to appear on almost every Dionysus release since. 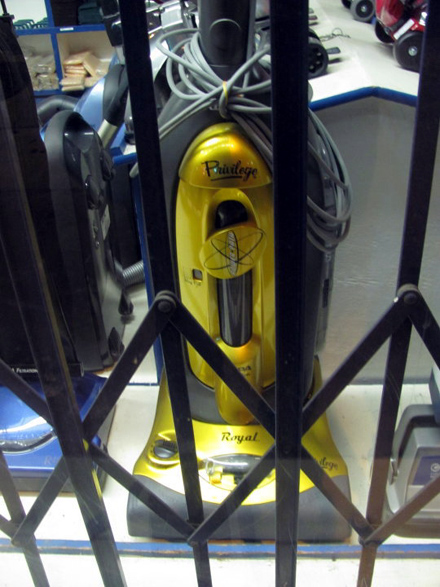 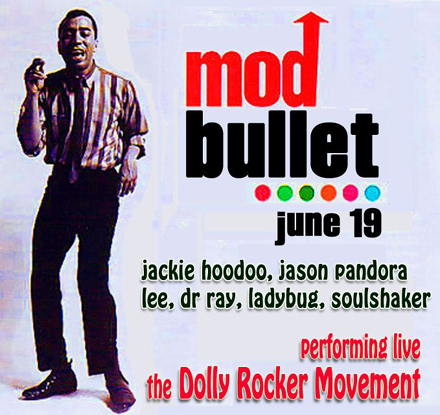 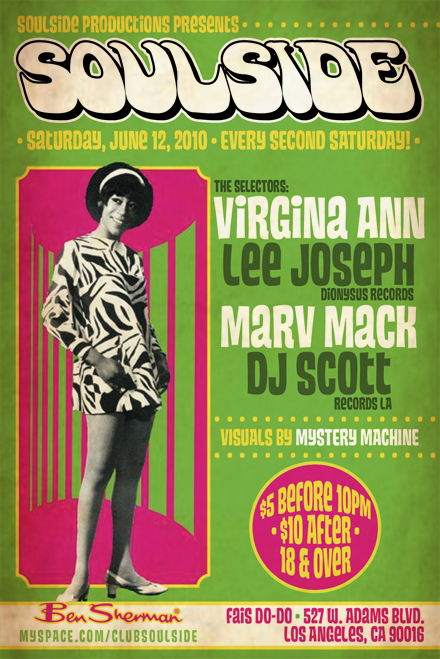 Los Angeles might be the capital of conspicuous consumption, but the other cliché about “La La Land”—that it’s a cultural wasteland—couldn’t be further from the truth. For every “Extreme Makeover—Club Edition” (in which would-be impresarios continually swankify their establishments in a relentless quest to be “the” hot spot du jour), there is a well-worn drinking hole full of history, serving up a far more elusive and seductive mix of stiff drinks, loose atmosphere and keep-it-real regulars.

In Los Angeles’ Best Dive Bars, you’ll get the scoop and the poop on the city’s liveliest, lowlife n’ liquor-soaked landmarks. This essential booze bible has the lowdown on which bars serve free food, which have great—and not so great—karaoke, bars that appear in your favorite movies and much, much more. Whether you’re looking for a friendly spot where “everybody knows your name,” a filthy blackened cave where nobody ever will, a gently-gentrified hole specked with dive-obsessed hipsters or a dusty relic full of hip-replacements, you’re sure to find a spot to soak up—and get soaked in—here in these pages.

LINA LECARO is the nightlife columnist for the LA Weekly. She has been patrolling Los Angeles’ most decadent after dark dens and its grungiest grottos with equal aplomb for over twenty years (i.e. before she could actually drink legally). A born and bred Angeleno, she’s no angel when it comes to digging deep into LA’s most harrowing drunkard-approved hovels . She might prefer her cocktails sweet, but her favorite bars (and barflys) have always been anything but.

Lina will be at the event to sign her book. There will be free Sino Tequila along with other liquor and food. All dive-bar hoppers, nightlife fans and lovers of Los Angeles are welcome.

Rick Araluce  “The Poetry of Unreason”

Rick Araluce makes miniature constructions. That means he makes everything himself by hand, including the boxes that contain the collections. He’s spent years inventing methods to fashion (from scratch) a turned table leg, door hardware,  a light bulb, a clock case, elaborate trim moulding, and whatever else is required to complete the illusions. Rick has created flutes less than an eighth of an inch in length, functioning miniature clocks measuring less than a quarter inch in diameter, and light switches that illuminate rooms seventeen miniature floors beneath them. No detail is sacrificed by the diminutive scale -even if those flourishes go largely unnoticed by the casual observer; however is nothing casual about the art of Rick Araluce, who makes his return to La Luz de Jesus after more than a decade abroad.

JAW Cooper’s series “Tarnished” explores the allure of imperfection. “I’ve created a world inhabited by the deformed, tainted, injured, and alien, where external imperfections are echos of internal struggle,  and beauty is undeniably in the eye of the beholder. Behind every flaw is a story waiting to be discovered,” states the artist. Cooper was born in England and grew up in Africa, Sweden, Ireland, various other locations throughout Europe, and California. She has always cultivated a deep curiosity for the natural world and is inspired by forms found in nature, curio cabinets, fashion photography, and nipples in general. Cooper currently lives and works as an illustrator and gallery artist in Los Angeles, California. The artist will be in attendance.

Jessica Dalva’s new series of sculptures and oil paintings is only her second featured exhibition at La Luz de Jesus, but marks one of the most anxiously awaited series of new work from an emerging artist in recent memory. The centerpiece of “Tie Strings Into Knots” is an eerie, hanging chandelier that instills a sense of wandering for home, while illuminating a lost sense of virtue. Sometimes a lamp is just a lamp. But this is not one of those times. Dalva’s marionettes and mobiles inject their surroundings with instant nostalgia via a modern craft-esthetic rooted deeply in antiquity. The artist will be in attendance.

“Gone West” was an expression used in the air force during wartime to describe a brother-in-arms who was shot down and killed in combat. When pilots gather, they often open meetings with a toast to those who have “gone west”. They face the west and drink to those who have died. West, in this case, refers to the place the sun sets and extinguishes; the metaphor is clear. This somehow softens the reality of death in a line of work rife with mortality. Bonni Reid has co-opted this expression ion titling her most recent body of paintings. Representing transformation, passage, and change, the title takes on an added, metaphysical tone, not unlike the Death card in a tarot deck. this exhibition features all new, never-before-seen work. Bonni Reid lives in the West End of Vancouver, British Columbia. When not brewing her own visual concoctions, she freelances as a color designer for animation productions including six seasons of Cartoon Network’s “Ed, Edd ‘n Eddy”.

Krystopher Sapp’s mixed media assemblage is a sculptural study in discarded ephemery. His workshop is a literal hereafter for broken toys, liberated fixtures, and kippered insects. Rich dioramas of recontextualized doodads transform into a steampunk nirvana of Victorian futurism, both resplendant and refined, but with a secret tinge of horror within each dark dimension. La Luz de Jesus is proud to welcome back Krystopher Sapp for his third featured exhibition, for which he’s dialed back volume but escalated detail to produce a collection of ambitious perfection. The artist will be in attendance.