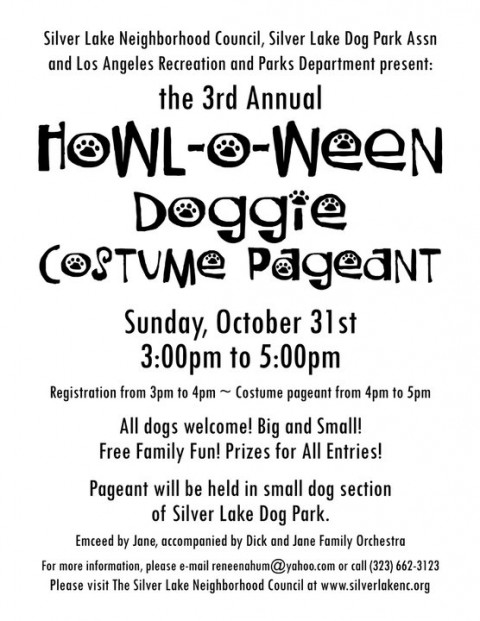 All dogs welcome – big and small
All dogs get a prize!
Fun for the entire family!!

For more information, please send email to reneenahum@yahoo.com or call 323-662-3123

Elvis Presley, the Hell’s Angels, Hunter S. Thompson, Truman Capote, the Beatles, Judy Garland, Hank Williams, the Manson Family, Jack Kerouac, Johnny Cash, JFK, and Adolf Hitler. All of the above were, at one time or another, to put it bluntly, speedfreaks. Speed – Speed – Speedfreak: A Fast History of Amphetamine” traces the criminal and cultural use of amphetamine and its growing use through each new and destructive cycle. The book will be printed in rounded pill capsule form, like the vaunted “black beauty” of pharmaceutical history

Author Mick Farren is a pillar of the counterculture and one of the last Bohemians standing. He is the author of close to forty books both fiction and otherwise and has released some 20 albums. His lyrics have been performed by Hawkwind, Motorhead, Metallica, Brother Wayne Kramer and others. The exhaustive research on “Speed – Speed – Speedfreak: A Fast History of Amphetamine” was helped by his own youthful taste for what was laughingly called the devil’s dandruff. For the reading part of the fun, he will be accompanied by master guitarist Andy Colquhoun.

Attendees are encouraged to come up to the microphone and share their favorite stories and tales involving amphetamines: real, imagined, personal, anecdotal, second-hand, historical, nightmarish and/or cautionary. While no one involved in this event advocates the use of narcotics, we recognize their pervasiveness–at a time when an estimated 40% of Montana’s youth is on speed, for instance, it is blatantly apparent that a great number of adults have either taken speed or know someone who has. Prizes will be awarded for the most popular stories told!

Whirlingturban has long been known amongst aficionados as the world’s only existing maker of authentic vintage styles from Golden Era of Hawaiian dresses. A sarong dress from Whirlingturban is a sartorial Must Have for all those who seriously pursue Tiki culture.

Whirlingturban is offering  FREE SHIPPING on all its ready-made dress stock between now and August 5, only for customers who mention Tiki Oasis.

Many Whirlingturban’s are one of a kind and READY–MADE STOCK IS EXTREMELY LIMITED (as most Whirlingturban’s are made to order or sewn when they are ordered.) Grab yours now before someone else gets the only ready-to-ship dress in your size in the fabric you want.   A few of the styles shown in our Bombshell Boutique are not yet sewn, so you will need to ask us if it’s available  AND mention Tiki Oasis. If you order in the next few days, we may have time to sew the dress before August 5 (allowing time for the dress to be shipped to you from studio in Bali.) Dress must be paid in full, before shipping and before August 5th.

Always wanted a custom-fit Whirlingturban? Win one! To enter, click the photo above of the beautiful Bernie Dexter in one of her many Whirlingturban’s. Guys can also enter to win one for your gal!
July 23, 2010by Dionysus Records