Join me on episode #8 of “Over Under Sideways Down” on LuxuriaMusic.com for two hours of Rock ‘n’ Roll ‘n’ Rockabilly 45s from the 1950s – I’ll be in-studio, live, playing almost all original 45s (with the exception a couple of now over two decade old repros.) No compilation LPs, no CDs and no MP3s! It will be a rockin’ good time for all! 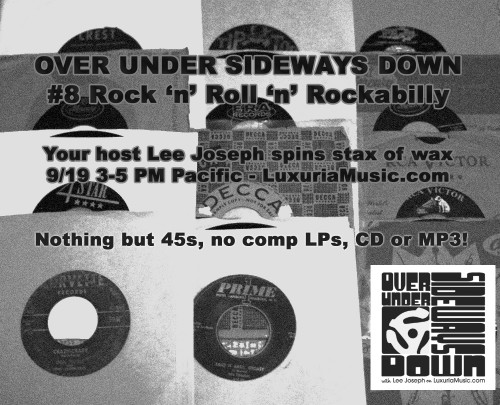 For the seventh episode of my ever changing, un-themed / themed LuxuriaMusic.com Internet radio show “Over Under Sideways Down”, I invited my pal, record collector and East-Coast transplant Jay Marshak to the studio with a couple of boxes of Doo-Wop 45s from his incredible rekkid collection. The result was a very entertaining two hours of sweet East Coast harmonies, rock ‘n’ roll, and lots of stories about Jay’s youth in late ‘50s – early ‘60s Brooklyn.  Now I know what “dancing on a dime” means!

Click here for a link to the show podcast – and below the photograph is the playlist! Listen with love!! 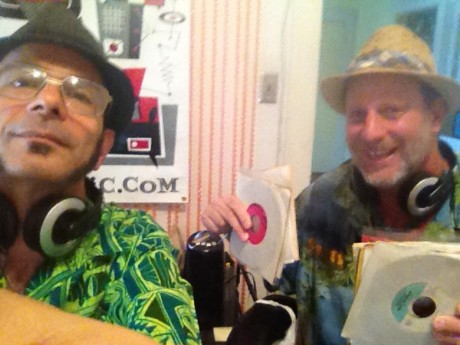 
Set Two:
Lucky Me, I’m In Love – The El Domingos
I’m Gonna Cry – The Fascinations
Guardian Angel – The Selections
I Hear Those Bells – Nick St. Claire
Childish Ways – The Suddens
Cards of Love – Tico and the Triumphs
Here in My Heart – The Timetones
We Belong Together – The Vidals
My Memories of You – Donnie and the Dreamers
Again – The Concords
Ding-a-Ling-a-Ling-Ding-Dong – The Ding-a-Ling-a-Ling-Bing-Bongs

Set Three:
Teenage Vows of Love – The Dreamers
Let it Please Be You – Rick and the Masters
Picture in Your Wallet – Darryl and the Oxfords
It Takes Two to Fall in Love – The Del Cades
The Day We Fell in Love – The Ovations
There’s a Place in My Heart – The Videls
It’s You – The Deans
Believe Me – The Royal Teens
Lost Love – The Superiors
Hey You – The Imaginations

Set Four:
You’re Too Young for Me – Johnny and the Dreamers
A Letter from Anne – The Videls
Wishing Well – Ritchie Dorn
Angel of Love – The Majestics
I See a Star – The Roulettes
Starlit Night – The Emotions
Rags to Riches – The Accents

Set Five:
Mirror Mirror – The Arrogants
And When I’m Near You – Ritchie and the Royals
Anniversary of Love – The Pussycats
Oh Darling – The Jaytones
Pizza Pie – Norman Fox and the Rob Roys

September 18, 2012by Dionysus Records
Benefit, The Creatures of The Golden Dawn 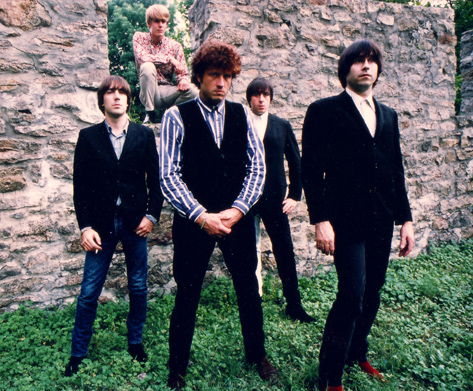 September 18, 2012by Dionysus Records
LuxuriaMusic.com, Over Under Sideways Down

On Wednesday, September 5, 3pm – 5pm Pacific, tune in to “Over Under Sideways Down” on LuxuriaMusic.com for two hours of Doo-Wop from 45 RPM “rekkids” with my special guest, bona-fide Brooklyn boy Jay Marshak. Expect to hear some heavenly vocal sounds and a bit of background on these records from Jay’s collection!