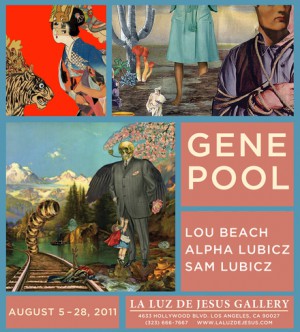 Lou Beach, Alpha Lubicz and Sam Lubicz are connected via DNA ( father, daughter, son), glue, scissors and X-acto blades and a love of cutting and pasting. They make collages of depth and beauty that chronicle their journeys through the subconscious, creating imagery that is strongly graphic and narrative, telling tales that alternate between the immediate and the mysterious, visionary speculations on pop culture, comics, death, sex and personal history.

Over the last 30 years Lou Beach’s work has been featured in major magazines as well as on countless record and cd packages, book covers and advertisements. A much-admired pop icon of Los Angeles’s wild era of illustration in the 1970s and 80s, Lou Beach has remained a vital force in today’s competitive world of popular art, creating imagery for clients as diverse as the Wall Street Journal, New York Times, The Utne Reader, The Paris Revue, MCA Records, Random House, McGraw-Hill and Houghton-Mifflin among others. A tour of this self-taught collagist’s mind reveals a delight in visual puns and a direct link to such greats of the medium as Hannah Hoch, George Heartfield, Max Ernst, Romare Beardon and Tadanori Yokoo as well as influences from popular culture. His collages have also landed on record covers for Weather Report [Grammy nomination],The Carpenters, The Neville Brothers, Dave Alvin, Dr. John, Ethel Merman and Blink 182.

Lou Beach was born in Gottingen, Germany in 1947, and his name is actually the phonetic pronounciation of his real last name, Lubicz. His Polish parents were unwilling guests of the Nazis–his father a prisoner-of-war, his mother a slave laborer. In the 1970s, he began his career as a record cover illustrator. In the 80s and 90s he was a beloved instructor at Art Center College of Design and Otis. He has recently collaborated on a short book of fiction with author J. Robert Lennon, and a book of his short stories will see publication through Houghton Mifflin Harcourt in December 2011.