Damian Fulton is fascinated by the dichotomy and duality of Los Angeles seaside culture. The proximity of one of the world’s most diverse and congested cities to the Pacific coast provides fertile material for Fulton’s dark take on the California dream. Perhaps it’s in the water.

Surfploytation continues Fulton’s twisted ride down Pacific Coast Highway where Surf City is way more gritty than groovy. Car chases, girls with guns, noir nostalgia, a visual narrative that reads like conceptual art for a fictional surfploytation movie. For this show, experimentation with new materials native to his environment, balsa wood and fiberglass, skate decks, and surfboard fins, have this new work amped up to 11.

Fulton’s imaginative blend of storytelling, scrambled pop imagery, and painterly technique belie a respect for traditions of the past. Inject in his love of the ocean and urban experience and you have a distinctly original vision.

Fulton grew up land-locked in Orange County, California and painted his way through college at Cal State Fullerton doing custom art for vans, spontaneous wall murals at parties in the OC and self publishing Thrust, the Magazine of Narrative Sequential Art.

Out of college, Ocean Pacific hired him to paint surf posters and in 1982 commissioned him to create the official poster for the Op Pro Surf Contest.  His counterculture comic strips like “The Shred Brothers” running in Surfer Publications’ Snowboarder and the original extreme sports classic “Radical Rick” which rode for 15 years in BMX Plus! Magazine. Fulton has had careers working for Oglivy and Mather Advertising, Marvel Comics and has directed television spots for Pepsi, Mattel and Universal Interactive.

In 2005 on the 50th birthday of Disneyland, Fulton was commission to paint several prints commemorating the event. Fulton currently resides in Los Angeles, CA. www.damianfulton.com

Robert Palacios The Game of Life

Drawing inspiration for his paintings from his childhood impressions and memories, life experiences and an American/ Latino heritage, Robert Palacios’ work is whimsical, playful and childlike with thoughtfully crafted characters. “Before beginning a painting, I sketch out my ideas. When the story is fully realized, I take those sketches and put them on canvas. At that point it’s a cerebral process; I’m thinking, concept-color-composition. When that part of my brain is satisfied, that’s when the mood comes into play and settles over me. Each painting is a vivid story of a world that I’m bringing to life. The viewer is introduced to a cast of characters and subplots often put into humorous situations that characterize as visual narratives of daily life, with a comical twist; the object being, to invite an interaction with the paintings” states Palacios

One of Palacios’ abiding inspirations is been a board game called that he played often as a child called “La Loteria” (the Mexican lottery game) which is played similarly to bingo but with a deck of cards. “The cards have numbers on them as well as wonderful, mystical, magical symbols and drawings. I still bring out that deck and peruse them for inspiration” states the artist who was born and raised in Los Angeles, California. www.robertpalacios.com 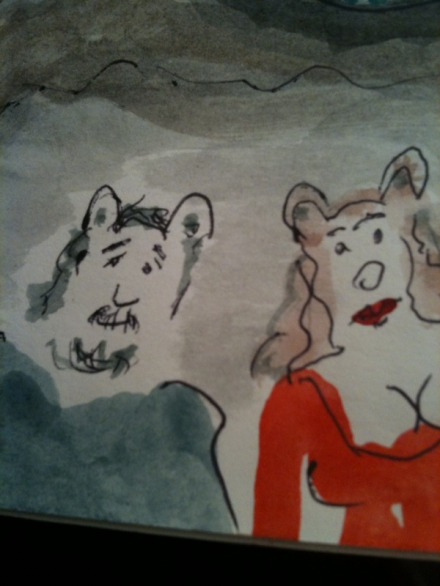 the
DICK AND JANE
Family Orchestra